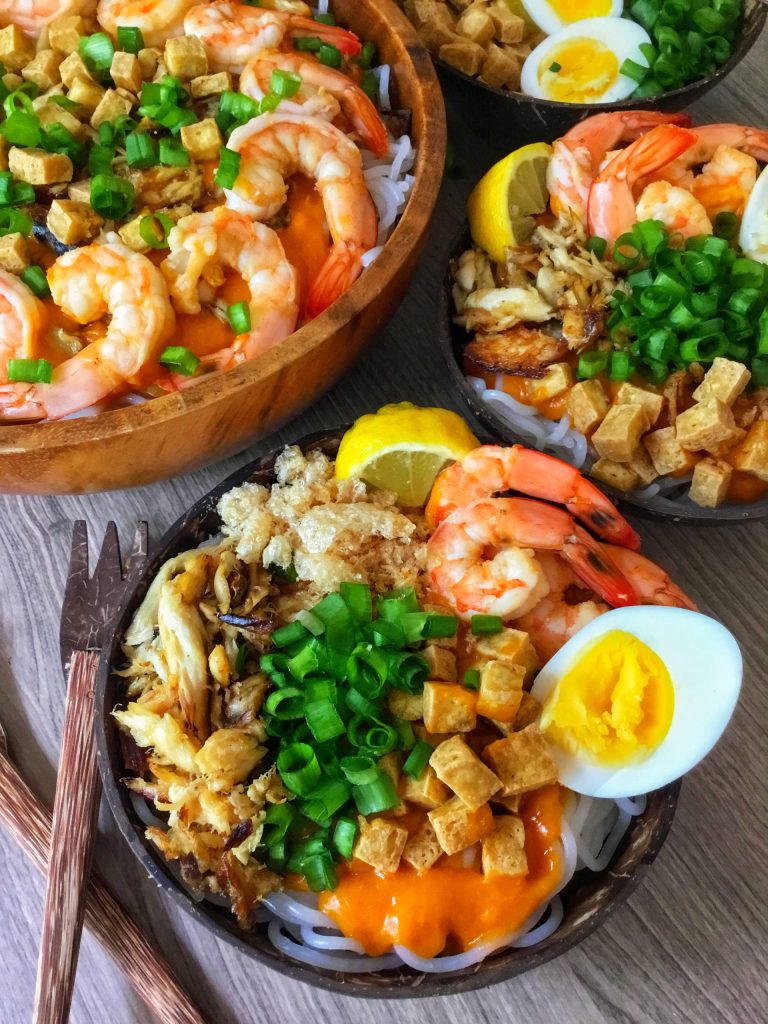 I developed a liking for this dish at an early age. Whenever we went to Jollibee, my mom would always order Palabok while for the rest of us, Spaghetti was the habitual choice. Because she always ate hers with gusto, I got curious and asked for a bite. The taste was complex and a bit overwhelming (at first) but as I started savoring it, I began to like it.

When I was in university, I always chose Palabok over Spaghetti whenever ordering at my favorite fast food chain. In fact, I was a “suki” (frequent customer) of a lady (roaming) street vendor who sold snacks and kakanin (rice cakes).  She would stop in front of our place and as she opened the translucent covering, a delightful cornucopia of colorful food all neatly arranged in a large bilao (winnowing basket) instantly made my mouth water.  Like clockwork, she would be in my neighborhood around 3pm and her loud but sweet-sounding call “Mer-yen-daaaa” intensified as she got closer to our apartment. Her palabok was simple and unpretentious with just bits of tinapa and a good dusting of chicharon. I don’t know if it was because of the MSG or it may have been because of her jolly and positive attitude that made me enjoy it even more. It was always good!

I’m not a fan of bouillon cubes that’s laden with preservatives, artificial colors and flavorings. Since I became a mom, I have tried to steer away (as much as I can) from the “stuff” that’s not good for my kids’ growing bodies. Yes, my kids eat junk food too but I try to balance it with some healthier options. Extracting the juices from the shrimp shells releases its natural flavor, giving it that umami richness that we all love. That, coupled with a plethora of toppings will result in a delicious tasting palabok!

The ingredients seem like a lot but don’t get overwhelmed as most of them can be made ahead of time. I categorized ‘em to make it easier to know which parts are done. That’s how I always “tackle” an unfamiliar recipe. I do them in small parts then combine them together at the end. Ready, let’s make palabok! 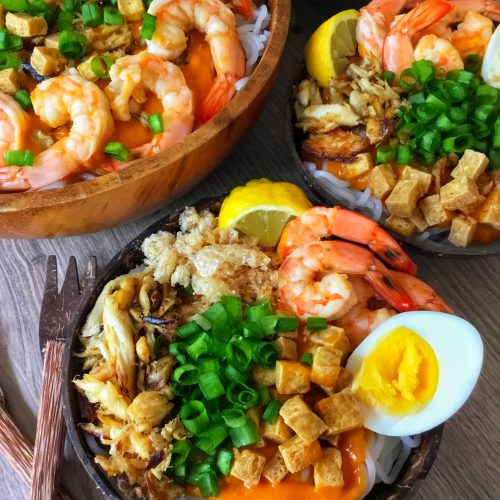 Pam from PinoyBites
A classic Filipino noodle dish doused with a shrimp-based thick sauce and a generous amount of toppings such as shrimps, smoked fish flakes, boiled egg and fried garlic bits then finished off with a sprinkling of green onions and a slice of lemon.
Print Recipe Pin Recipe
Prep Time 30 mins
Cook Time 1 hr

*To cook Bihon noodles, simply add the dry noodles in some boiling water (enough to submerge it) and cook for about 2 minutes or until fully cooked and tender. If using palabok noodles, follow the instructions at the back of the packaging on how to cook.
Feel free to share with your friends!
Share Pin this! Tweet