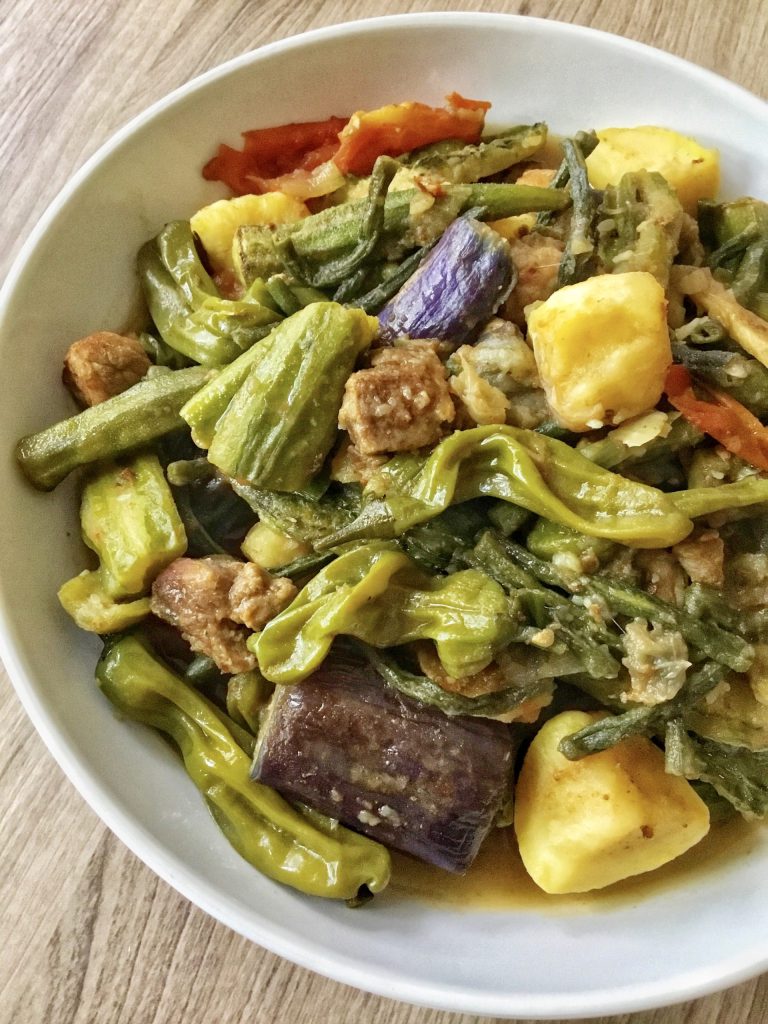 If Adobo is the unofficial national dish of the Philippines, Pinakbet (to me) is its equivalent in the Ilocano cuisine. With a myriad of vegetables that represent the bounty of the north’s fertile soil, this dish definitely speaks what Ilocos region has to offer.

The name originated from the word pinakebbet which means “shriveled” or “shrunk”. All the ingredients are neatly arranged in a pot and cooked on high heat until rapidly boiling then tossed by shaking the pot to evenly cook the vegetables. Not to be confused with the Tagalog version of the Pinakbet, which uses shrimp paste and adds squash to the mix. Sweet potato is used instead which gives a good balance to the bitterness of the ampalaya (bitter melon). For a more indulgent Pinakbet/Pakbet, top it with slices of our Crunchy Puffed Skin Lechon Kawali (recipe here) or the famous Ilocos Bagnet if you have some.

Unlike in the Philippines where all the possible Pinakbet vegetables are abundant, the veggies I use here differ every time. As long as I can get my hands on at least 4 major ingredients, it’s on! Just remember to buy the best bagoong isda you can find for a delicious outcome every time. 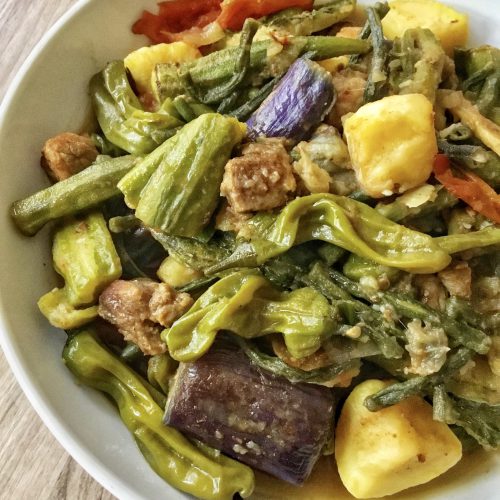 *You can omit the pork for a meatless version or use dried alamang (dried baby shrimp) or Lechon Kawali. **Other vegetables that can be used in addition to or to replace some of the others are as follows: lima beans (patani), winged beans(sigarilyas), green onions, small round eggplant ***Bagoong isda is different from Bagoong alamang. Bagoong Isda is made from fermented fish while shrimp fry is used to make alamang. Saltiness varies so make sure to taste the dish before the cooking process is done.
Feel free to share with your friends!
Share Pin this! Tweet

[…] some “greens” make an appearance. Sometimes it’s a combination of a bunch of veggies like Pinakbet or Chop Suey, cut up raw cukes or carrots or a simple stir […]