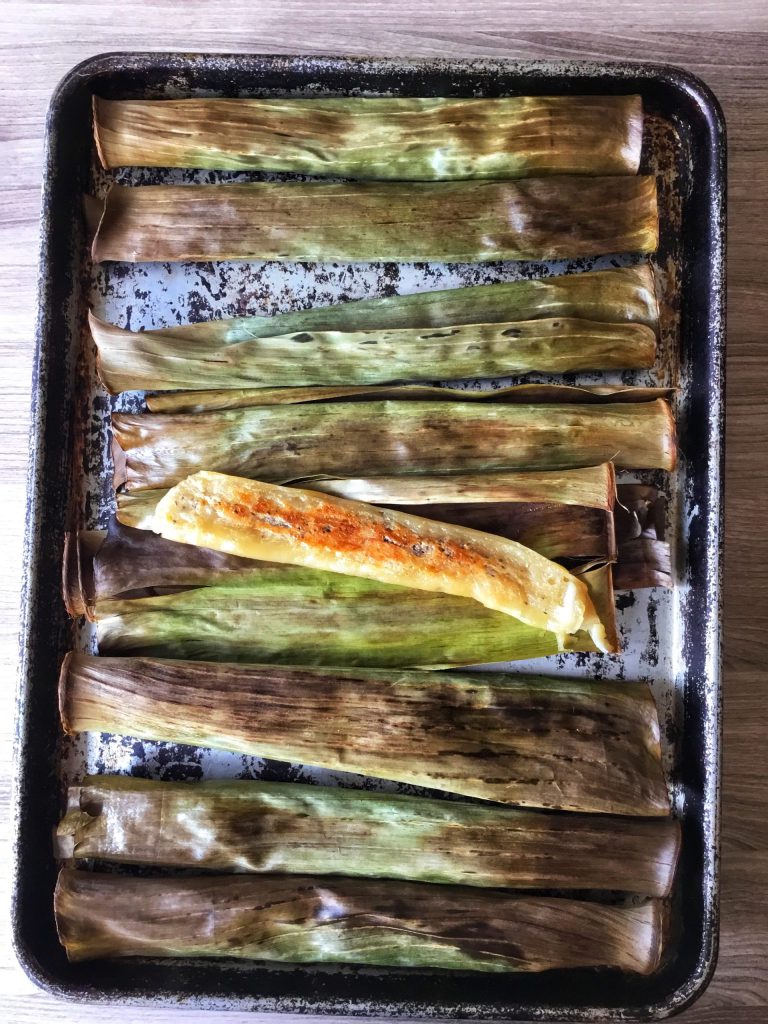 A big part of my childhood was spent in Pagudpud, Ilocos Norte. Yup! It’s the town in the north that’s famous for its white sand beaches. I can go on and on talking about how great Pagudpud is but for now, Tupig (Tinupig) takes the center stage.

While others think of Puto Bumbong at Christmas time, Ilocanos think of Tupig (or Tinupig). I remember when I was young and when it was time to make it, everyone take their part in making hundreds of these yummy treats.

Snipping the ends of the coconut leaves and a little bit of wrapping was my part but I wasn’t good at wrapping back then. The right amount of filling is tucked between two long coconut leaves, otherwise, the raw filling would ooze out of its ends. It would then be placed on top of a clean, hot sheet of galvanized roof to cook. There would be continuous fire going on underneath and you’ll know it’s done when both sides are charred and you can smell the delicious aroma of the Tupig.

I miss eating it! But since I cannot do it the traditional way, I had to improvise. This is actually the easier version, one that we can make in our part of the world. The finished product looks like you were in the kitchen for a day but I promise you, it doesn’t even take an hour to enjoy the first batch. 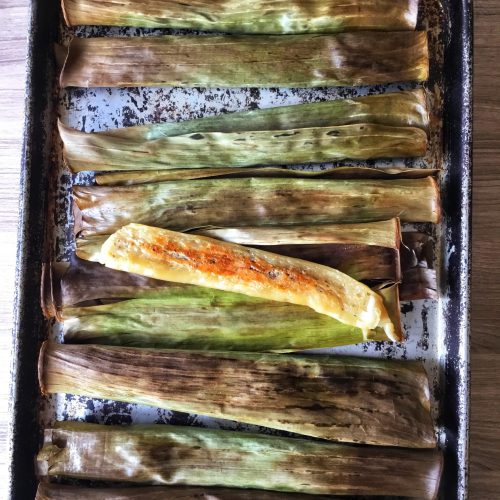 *Bottled macapuno vary in sweetness and texture. If the pieces are too long and tougher than usual, cut into smaller pieces before adding to the mixture. The brand I used is called Tita Ely’s. It has the texture of real macapuno and is not overly sweet.

Thanks, Victoria! Hope you give it a go.😊

I wi try this. Can you add the sweetened coconut flakes?

Hi Nena! I think your tupig will be drier because the coconut flakes are dehydrated and it will absorb more liquid. Try using buco strips instead. If you have more questions on this, you can send me a msg on the Pinoybites’ facebook page. Thanks!😊

I am Ilokano and I love tupig. So happy i can cook this in the oven. Much easier than using my grill. Thanks for the recipe😘

Hello Nenette! I am also Ilocano (my mom’s side) and spent a big chunk of my childhood in Ilocos. I miss tupig too so I had to find a way. Thanks! Naragsak a Paskua kenka! 😊

Thanks for sharing. I definitely will try this.

Hi Jane! Thanks so much for checking out my Tupig recipe. Hope you like it as much as we do! Merry Christmas 😊

I was excited to find this recipe and tried it. Since the batter was so thick and difficult to stir, I had to add 1/4 cup of water. It looked like i have to knead it like bread dough. I followed the cooking instructions. When I opened one, it looked half done, thick and dense. I proceeded to add 5 minutes to the cooking time but the tupig didn’t look anything like tupig. I cooked it a little bit longer until the banana leaves were burning. Not much change in the look and texture.

Hi Yes L! I’m thinking of a reason why it didn’t work for you. The batter should be thick as pictured in the recipe. Some brands (flour) need more liquid than others but it still won’t be kneadable as bread dough. Pls check the ingredients that you used as some glutinous flour packs come in 500g (you only need 400g) and the same goes for the coconut milk. In your case, I’m pretty sure it’s the flour. I have made this recipe tons of times and always have the same results. Message me if you want me to help you… Read more »

May I know the total yield of this recipe? Thanks!

Hi Cha! It’s between 15-18 pcs. Sorry, I forgot the exact number. I’ll try to make soon then will add the yield. Thanks for dropping by! 😊

I tried to give this a go. The texture is good, but unfortunately, 1 cup of sugar is not enough. If I will ever decide to try this recipe again, I will add another cup of sugar. P.S. I don’t fancy super sweet desserts, this one just doesn’t taste sweet at all. Thanks for the recipe, though.

Now I need to figure out how to eat this. Lol. Maybe dip it in muscovado?

Hi! Did you use bottled sweetened macapuno? The sugar in that plus the brown sugar in the recipe is sweet enough. I made this recipe a bunch of times and I never had that issue. It will only come out without any sweetness if fresh young coconut is used (buco), which is unsweetened.😊

Thanks for the response, Pamela! My bad! I used fresh young coconut🤦‍♀️. Oh my gosh! I’m sorry, I didn’t mean to be a jerk. I was craving for it, made it, and almost burnt my house to the ground. Yep, just my luck! Anyhow, I’m going to try to make it again, this time with sweetened macapuno and an outdoor grill😇. I hope this turns out good this time. Wish me luck!

Thanks for your updated comment, Mi! I get it though and I would have made a similar mistake as macapuno is not the typical ingredient to use. Yes, it’s getting warmer in here too so I might cook some using the grill. 😊

I super love tinupig! Always had it when travelling north when I was younger. Tried your recipe and turned out really well for me.Thanks!

Hi Val! I’m so glad that you like it! This recipe came about because I miss Ilocos very much. 😊

Missing this so much!

Making this always reminds me of home. Hope you give it a go. Thanks for stopping by Cora! 😊

How many servings of tupig po yung nagawa niyo for 1400 g of flour?

Ohhh I can’t wait to try this! My Mom is from Pagudpud too 😊

Oh wow, maybe I know her. Hope you like it and thanks for stopping by, Claire.💕

Finally found a perfect recipe for tupig, thank you for sharing the recipe. Tupig brings back childhood memories, now i can share with my girls, the stories and the taste and I’m glad they love it, too. Now, we can enjoy it as much as we can, anytime we want 🙂
God bless you always. Fellow Ilocano here, base in HK

Dios ti agngina, Kailian🤗
I shared the recipe to my sister, and they loved it, too..My niece ate most of it daw😁..

I am Cebuano and I love Tupig. So I follow this recipe but instead of brown sugar I used condensed milk. Uhhhmmmm sooo yummy.

Thank you for sharing the recipe.