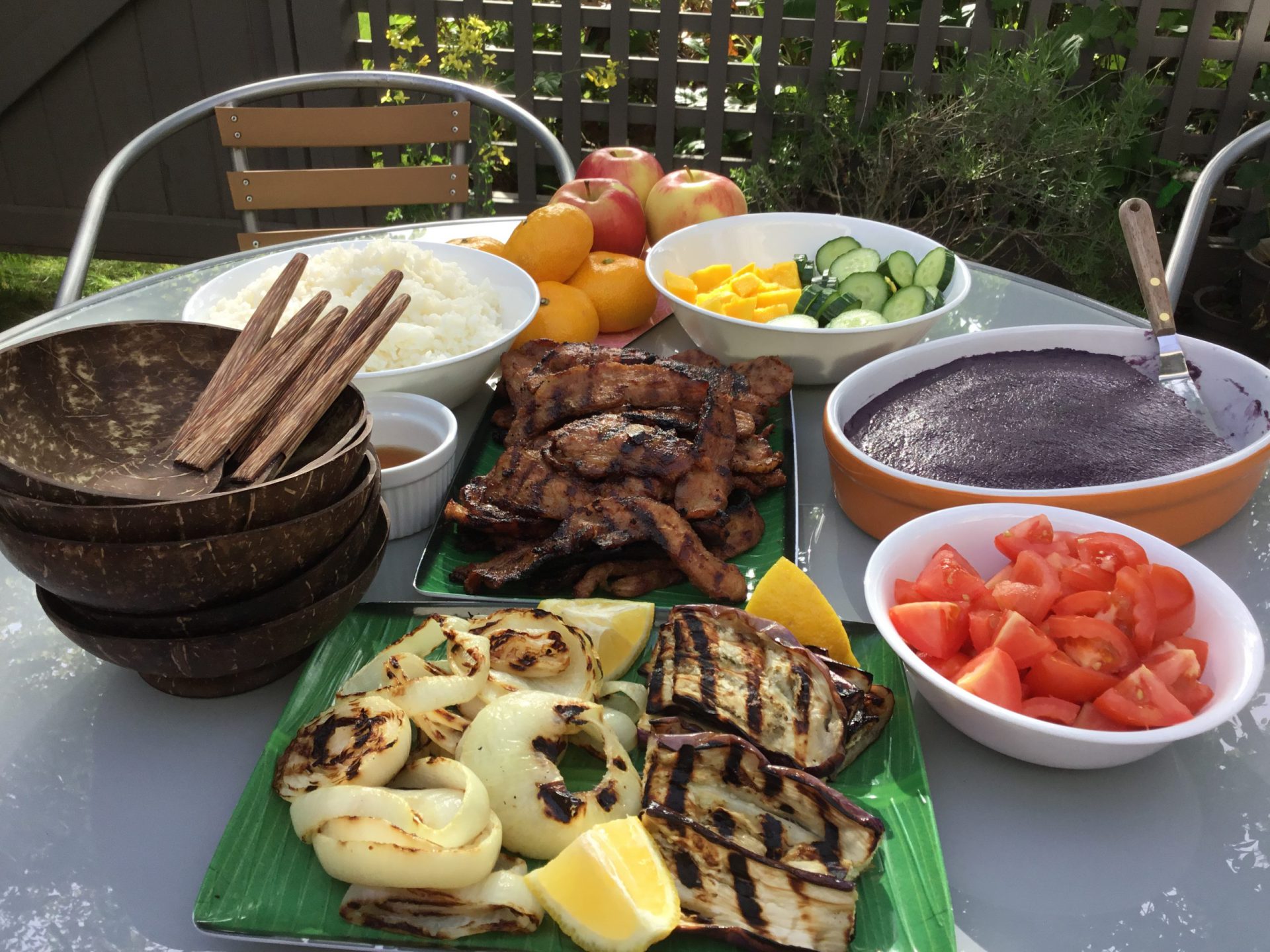 Ampalaya (bitter gourd) are green and resemble fluted cucumbers. They are available fresh from Asian grocery stores. Bitter gourds are sometimes salted before cooking to eliminate their bitter taste.

Atsuete, also known as Annatto seeds, are dried, reddish-brown seeds that are used commonly as a food coloring dye. The seeds are soaked, then squeezed in water to extract the red coloring, which lends an orange to reddish tint to food. Artificial red food coloring may be substituted.

Bagoong (shrimp paste) is a dried, salty paste made from fermented shrimp. It is the same as Indonesian trasi, Thai kapi or Malaysian belachan.

Cilantro (coriander leaves) are widely used as a flavoring and garnish. Fresh coriander leaves have a strong taste and aroma and can be refrigerated in a plastic bag for about one week.

Chicharon (pork cracklings) are thin pieces of pork rind that are grilled and then deep-fried until crispy. They are sold in packets and are available in Asian grocery stores.

Chorizo sausages are dried pork sausages flavored with paprika, garlic and chili. In Filipino cuisine, they are usually added to stews rather than being eaten on their own.

Coconut milk are used in many Filipino desserts and curries. Although freshly pressed milk has more flavor, coconut cream and milk are now widely sold canned or in packets that are quick, convenient and quite tasty. Canned or packet coconut cream or milk comes in varying consistencies depending on the brand, and you will need to try them out and adjust to get the thickness you want.

Hoisin sauce is a sweet Chinese sauce made from soybeans. It is used as a dipping sauce and flavoring and is sold in jars or cans in Asian grocery stores.

Kangkong (water spinach) is a nutritious leafy green vegetable also known as water convolvulus. Young shoots may be eaten raw as part of a salad platter or with a dip. The leaves and
tender stems are usually braised.

Lumpia wrapper (spring roll wrappers) are thin crêpe made from a batter of rice flour, water and salt, with or without eggs. Wrappers made with eggs are known as egg roll wrappers
and rolls made with this type of wrapper are normally deep-fried. Thinner rice flour wrappers come already cooked and must be moistened with a bit of water or steamed to make them
flexible.

Palm sugar is distilled from the juice of the aren or coconut palm fruit, and has a rich flavor. Substitute with dark brown sugar, maple syrup or regular sugar with a touch of molasses.

Pancit Canton (Canton noodles) are thin noodles that are made from wheat and egg. They are available in round or flat shapes in a variety of sizes.

Patis (fish sauce) is made from salted, fermented fish or prawns. It is clear, golden brown in color, tastes salty, and is used in marinades, dressings and dipping sauces. It is sold in bottles and is available in Asian grocery stores and supermarkets.

Pinipig is a rice cereal that has been flattened and toasted in a pan to make it crunchy. It is used in desserts or as a topping. It can also be eaten as a cereal or as an accompaniment to thick hot chocolate. If pinipig is not available, rice Krispies cereals may be used as a substitute.

Plantains look like bananas, but are less sweet and have a firmer texture, which makes them suitable for preparation as a vegetable. They are available in both Asian and Hispanic groceries.

Puso ng Saging (banana heart) is the tender innermost portion of the stem of the young banana plant. It is cooked as a vegetable and is available fresh in Asian grocery stores.

Rice flour are used in Filipino desserts. It is usually sold in packets in Asian groceries.

Rice vermicelli are very fine, white threads made from rice flour. These dried noodles can be easily rehydrated by soaking in hot water for a few minutes, then rinsing before adding to soups or frying.

Sago (tapioca pearls) are tiny dried beads of sago obtained by grinding the pith of the sago palm to a paste and pressing it through a sieve. It is glutinous, with little taste, and is often used in Asian desserts.

Sayote (chayote) aka christophene or choko, is a pale green squash that resembles wrinkled pear. It should be peeled before use and should be available fresh in Asian stores.

Sili (chilies) come in two basic varieties; the small but very “hot” chilies are more commonly known as siling labuyo. They are referred as “bird’s eye chilies” as well. These are often chopped and used in dipping sauces. Siling labuyo chilies are used sparingly -the amount of heat increases as the size diminishes. The longer finger-length chilies, known as siling mahaba in Tagalog, are often cooked with soups and stir-fries. To reduce the heat of a chili while retaining its flavor, make a lengthwise slit and remove the seeds.

Tokwa (tofu) is a soy product that comes in many forms and consistencies. Firm tofu is sold fresh in supermarkets in sealed plastic tubs. Pressed tofu is tofu that has been pressed to expel most of the water.

Toyo (soy sauce) is brewed from wheat, salt and soy beans. Black soy sauce is dark and thick and gives a slightly smokey flavor to a dish, while regular soy sauce is thinner and saltier.

Wonton wrappers are square pastry-like wrappers sold in various sizes. They are filled with meats or vegetables, then fried, steamed or boiled in soups.