Food waste is one of the top things that I avoid. It makes me upset every time I have to chuck food items in the bin because it’s no longer usable. Sometimes, my creative juices flow whenever I’m in the situation when I have food that’s just hanging on a thin thread before it’s no longer fit for consumption. A perfect example is a bunch of bananas, which gave me a lot of “muffin” lessons before I figured out the frequency of buying that fits my family’s eating pattern.

Leftovers are (sometimes) a perfect canvas to create something new. This recipe came about when I overcooked a handful of sweet potatoes. It was still good but I like mine nicely tender, not almost mushy. After a couple of days in the fridge, I knew that it’ll eventually end up in the green bin unless I turn it into something else. I thought of making Palitaw – a popular Filipino snack item that looks like a flat disk that’s made from glutinous rice flour. It’s boiled until it floats, dipped in freshly grated coconut then generously sprinkled with sesame seeds and sugar. So, I mashed one and added to the palitaw dough. Since I used the light yellow kamote (sweet potato), a few drops of Ube flavoring (totally optional) made it more appealing.

I had a half-filled bag of dried coconut shreds that I had been meaning to turn into something else but never did. So, I lightly toasted it and used to coat the palitaw because I don’t normally buy the frozen ones. I wish I had the courage to crack open a fresh coconut. Until then, this is my take on this beloved native delicacy. The addition of the sweet potato made it tender and the texture blends well with the slight chewiness from the glutinous rice flour. Hubby and I love it so I have been making my palitaw this way since. 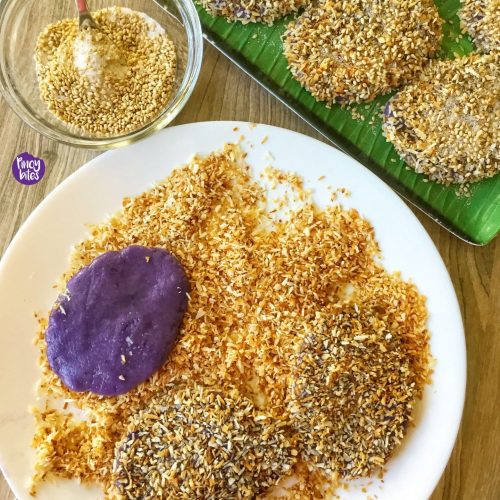 *The coloring/flavoring is optional. Use a purple or orange-colored sweet potato instead.
Keyword coconut, kakanin, meryenda, palitaw, rice flour
Feel free to share with your friends!
Share Pin this! Tweet